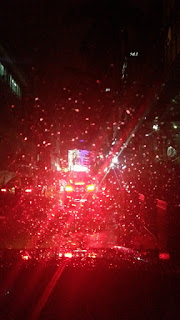 It rained in Bangalore. After long days of record breaking heat, the rain will bring some relief. I did not realise that it rained, till late. The first rain, to me, always was associated with the fragrance of the soil. Like lightning that precedes the thunder, this fragrance hits me before the rain does. It is missing and I wondered where it had gone. Like everything else in today’s digital world, I let my virtual friends in Facebook know of my predicament and drove towards home.
As I drove, I recollected that there were three distinct fragrances that I relate to, from my child hood. April always used to bring all three of them together. It was fresh, it was unique and it was still on the tip of my nose!

The soil was the first one. It had such an enchanting smell. As the first rain drops would fall, some amazing chemical locha works and the fragrance surrounds the place. As the rain poured on, the puddles of water on the road was making my drive difficult and I ran the risk of losing my memories of the fragrances.

I stopped over in a fruit stall. I wanted to buy some mangoes. They used to give me the second distinct fragrance.  We would go to my Dads house during holidays, and as I remember there were twelve different varieties of mangoes there. Dad would tell us stories of him planting most of those saplings. As we would get down from his scooter, I would be in the mystic world of the smell of the mangoes. Each one had a distinct smell, but I had a favourite. I would run to climb the tree and smell the mango from the tree, as it swayed in the wind, for me to pluck and taste it. I smelled the mango in the fruit stall, and I felt I was in my chemistry lab. Seeing my upset face, the shopkeeper tried convincing me, “sir, organic mangoes will come tomorrow”.  I still buy mangoes after smelling them, and probably is the reason I have not been buying them for a while now.

I turned around to walk out, and saw my third favourite fragrance right in the corner. Books!!! I took one from the shelf, opened it and took a deep breath. Goodness!! They still smell the same, well almost!! We would go to the small bookstall opposite to the temple in Palghat town. We would get to buy children’s comics. The bookstall had the fragrance of the freshly opened books and it still lingers. I bought a book and walked out taking another deep breath of its smell.

As I tried to sleep, I felt a new smell. It was the Iblur Lake stinking after the first rain. I sprayed the room freshener and went to sleep. The fragrances were lost.

Posted by Manoj Thelakkat at 10:59 AM

Our environment is changing and we are the reason behind it. So it is inevitable that the nature responds atleast by a change of "fragrance "

Our environment is changing and we are the reason behind it. So it is inevitable that the nature responds atleast by a change of "fragrance "

Loving the info on this website , you have done outstanding job on the blog posts.
clipping path service

i enjoyed reading your post thanks for sharing it.