Yaadon Ki Baaraat - A Charity event by Feed The Nation 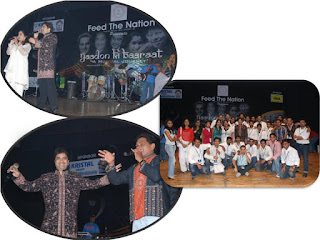 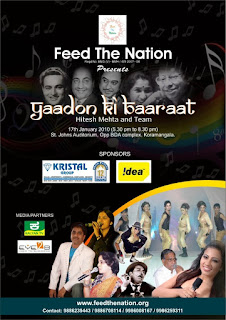 Yaadon Ki Baaraat as it was rightly named took us through a nostalgic ride of retro music, the golden era of Indian Music. It was a fund raiser organised for Feed the Nation. Appreciations that have come from all quarters including print media has given us the courage and momentum to chase our dreams and live up to our vision "


“To instill a sense of charity and selfless social service among youngsters for the progressive growth of our nation”.

Feed the Nation, the charity trust we founded 2 years back has grown from a small community of 11 members to around 330 members and is ever increasing. The need of a fund raiser came as the projects we were supporting have increased and the outlay every month has gone beyond the monthly contributions being provided from the members. We decided to do a series of such events to have a fixed fund that would support all our causes in the coming months and years.

“Raising a kid is a relatively easier job than nurturing the kid within a grown up”. Many who feel so end up sending their parents to places like these. A lot of people from very affluent families spend the remaining of their lives in these places, not knowing where they lost the plot! Going to these places we have been trying to give a few moments during which they treat like us their own. The satisfaction and conviction in doing this is immense. Expressing this is something that words can easily come short of."

We go there as to be one among them, have some fun – even if it is short lived. We have visited them and do so repeatedly and support them in various ways, be it school kits, uniforms etc.

We have seen these kids in orphanages waiting for us, when we inform our plan of visit. We organize painting, singing, dance competitions for them, we play musical chair with them, we organize lunch for them on that day and all of us eat with them. The day ends with the price distribution for the winners of the contests. The sad part is to leave them and go, but an assurance of coming back soon keeps the kids happy.

A visit to the kid’s orphanages or old age homes where our gestures are understood is a satisfying one. But what if these gestures aren’t understood? What if we aren’t even sure if the person we are talking to knows we are talking to him/her?! Institutes like these just need our presence. May be a childish laughter coupled with one more warms many a heart.

We work with mental destitute homes like Aakashaparavakal in Thannisandra. They rescue mentally ill people from the streets and rehabilitate them. We realized that most of them have some memory left in them of their homes, and are able to communicate the details .Unfortunately many of them are from north or east and speak only their mother tongue. This makes identification process difficult. FTN is currently working on creating language pool with our friends who are from various corners of working in . So when an inmate is brought in who looks to be from say, north east, we would take someone who can speak his language. We hope this would help the caretakers to trace his home and return him to his relatives.

Being mentally ill, they attend natures calls as it is.They tear off clothes in a virtual exhibition of primate instincts. They need t-shirts and shorts, may be a pair a week.

They have 70 inmates as of now.

Its very recent venture has been funding the Day Care Centre for the kids of contractual construction workers at NIMHANS, A full time teacher is also present in the day care centre, who takes them through basic education 6 days a week. We also support their needs of study materials and nutritious food in school.

Posted by Manoj Thelakkat at 10:50 AM