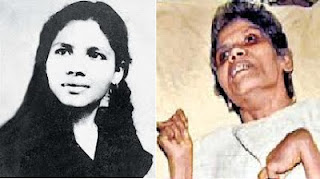 I was surfing channels the other day when I heard this name again “ Aruna Shanbaug” and  I ended up  tuning into a debate on Euthanasia.
Yes, I do have my strong opinion that Euthanasia should be made legal, and a person like Aruna is the most deserving case of humanity through mercy killing. But this is not about Aruna.

This is about Sohanlal Bhartha Walmiki. He is the sole reason that a young nurse, has been left to live a life of pain for the last 39 years.  Many would have read about her, for those who have not, this is what happened.
Aruna was 25 year old nurse working at the King Edward hospital in Mumbai. On 29th November, 1973, while she was changing after her shift, she was sexually assaulted by a ward boy of the same hospital named Sohanlal Bhartha Walmiki. He choked her with a dog chain and then proceeded to rape her. On realising that she was in her menstrual cycle, he changed the plan and instead sodomized her. He left her bleeding, after robbing her of her jewellery and watch. She lay there undetected till the early hours of the next morning when the morning shift started.

The asphyxiation cut off oxygen supply to her brain, resulting in brain stem contusion injury and cervical cord injury apart from leaving her cortically blind. She was bereft of the power of speech and expression. She lost the ability to control her muscles, use her limbs and worse, lost her memory. In other words, clinically she became brain dead!. Now Aruna is permanently bed-ridden, curled up in an awkward foetal position for the last 39 years ! !. Her friends approached the Supreme Court of India with an appeal for mercy killing or Euthanasia. The three-member medical committee set up under the Supreme Court's directive, checked upon Aruna and concluded that she met "most of the criteria of being in a permanent vegetative state". But the Supreme Court rejected a plea for Euthanasia, and she continues to EXIST.
Now what about the man who did this to her ?. Sohanlal Bhartha Walmiki was sentenced to 7 years in jail. His charges ? Robbery and attempt to murder. The police had registered a case of robbery and attempted murder, and not rape. The case of anal rape was kept concealed under the instructions of the Dean of KEM, Dr. Deshpande.
He walked out of prison and is believed to have started life fresh in some part of the country, with a new identity. Ironically it seems he is a ward boy in some hospital.
Is that the price one pays for putting a hapless victim through endless suffering for the last 39 years? A mere 7 years of state hospitality? Who pays for the sufferings of a young nurse who was to get married soon?
The same law which denied her euthanasia plea, forces her to live through the pain till she dies naturally. The same law also provides for Sohanlal Bhartha Walmiki to walk out scot free, after 7 years, get a job and new life and total freedom. Added it has given him complete anonymity. You cannot even trace him down, no images, and no whereabouts whatsoever.
If this is justice, what is termed as injustice?

PS : Sources/credits : Data & Images from google search and other sites. I have consolidated the information, and have tried my best to check its authenticity. But I request the reader to use your best judgement.
Posted by Manoj Thelakkat at 1:03 PM

Greatest shame. The law has been upheld but there is no justice.

She continues to suffer while that dog of dog enjoys life, albeit with a little guilt and since he has a new identity no stigma.

Disgusting. That dog should not have been allowed to see the light of day

SO sad that a Doctor do such a shamefull instruction to conceal such an importat statement.

How can you suggest euthanasia for a person you barely know personally?
The people who take care of her are the ones who know something about her and love her.Why should the journalist Pinki want to force something upon a person who lives as a blessing to many ,who is loved by all despite the fact that she is in no way recoverable?People should not think they can decide what they wish and enforce it upon others without knowing what Aruna wants.Let her die peacefully...do not kill her in the name of humanity and defile the meaning of that word

I think rapists and sodomizers and pedophiles should be castrated, left without either limbs, and their tongue should be cut to disable them from communicating. Then they should be taken to a place that they are not accustomed to and left there to beg. And while so, begging should be made illegal first so that people know that whoever is incapacitated in any way and begging on streets is a scumbag.

Lawless society would perhaps be better than having such laws.

All the people who seek justice...has to struggle that leaves criminals laughing at them all the time.

A day of my life has yet to see a true justice by man made laws !!!

She deserved at least mercy-killing in the later part of her life legally... and she couldn't even get that.

Shame on humanity, thanks to our laws !

Ever since it was know that the incident also involved a sexual offense. Was any attempt made to try him for that as well !!! If not, the entire concept of giving justice to victim, no matter how delayed it is goes to drain.